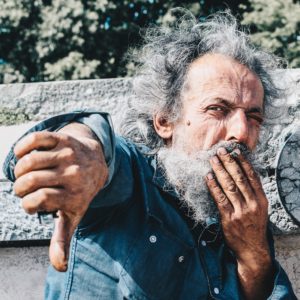 I have been in a relationship for nearly a year.  And although I’ve known him since we were both 10, we lost touch by the time I was 18.

He has been in and out of prison most of his adult life.

When he was released, he got back in touch with me.

I had felt a strong connection when I saw and hugged him again after so many years.

It made me think he was my soulmate.

He said he’d known he loved me since we were kids.

Because of his lifestyle, he said, he didn’t want to involve me.  That’s why he hadn’t been in contact.

He said he’s done with that way of living and wants to turn his life around.

He wants me to be a part of it.

And things were going great, to begin with.

I was trying to teach him how to let go of his ego and learn to live life more with his heart, it appeared to me as if he was trying.

Though we are very different, I felt like there was a reason we were brought back together.

However, over the past couple of months, we have been struggling.

He is also recovering drug addict.  After three plus years being sober, he started using again.

He says it was just the one time, but I see signs.

I have even started to question if he is seeing other women.

I seem to have lost all the trust and faith I had in him.

He does not work and has had a hard time finding a job because of his extensive criminal history.

But, in my mind, I don’t believe he looks very hard to find a job.

I feel like I have given everything I have to offer, (emotionally, physically, and financially), but that he’s just using me at this point. I feel he’s selfish and manipulative.

It is my nature to want to help.

I feel bad when someone is in a tough situation.

How do I take my power back and do what is right for myself without feeling guilty?

What we tell you now must not get to him, or you could be in danger.

There is no reason you can’t just dump him flat, and get out without guilt.

But don’t make a move until you can do so without harm coming to you.

This man has been a criminal since his first days in prison.

He wouldn’t know how to leave his life of crime, even if he wanted to, which he does not.

He doesn’t want to go back to the stockade, that’s true, but he does prefer the life of easy money to that of hard work.

If you think he’s your soulmate, you have been manipulated by his charm and sexual bravado.

Your feeling “Woo!” when you reconnected was not from the soul but from the loins.

However, the soul has warned you about him more than once.

It is your soul that begs you to wake-up before it’s too late!

If you can’t run safely away, wait to assemble support and then ditch him before he awakens from his next stupor.