You are here: Home / BOOKS 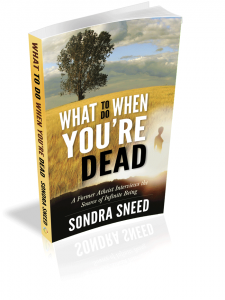 What to Do When You’re Dead:

A Former Atheist Interviews the Source of Infinite Being

What to Do When You’re Dead is a conversation with God. Imagine finding out you may hold the secret to man’s survival. Imagine also learning for the first time why you were born and that your work on earth is already recorded in the book of life.

It happened to Sondra Sneed, and you get a front row seat to the life of a reluctant messenger bringing forth a message that could save humankind . . . if humans are willing to listen.

This is not a touchy-feel-good spiritual guide, as much as it is an awakening with a warning about man’s self-destruction.

The warning comes with a unique responsibility, however, and that is to learn first and foremost why death is not real, and that our experience of crossing over to the other side is directly linked to our state of mind while on earth before passing. Darkness must be overcome, or the soul will remain trapped in the past and attached to things of the world, rather than following spirit to the light of God.

Sondra Sneed’s former career was as a corporate photographer and science and tech writer for Fortune 100 companies. Until the age of 39, she was also an atheist.  But then a life-altering event changed everything.

While in the throes of job loss and heartbreak.  Suddenly alone and suffering severe panic attacks, Sneed found her habit of journaling was the only thing that calmed her. And that’s when it happened.

One morning, on a clean page of a new spiral notebook, a message came through her pen before she noticed it moving. “Unemployed?” It said. “It is my assertion you are employed by me.” This mysterious entry sparked her year of solitude and before its end, she had filled 10 spiral notebooks taking dictation from God.

Seven years later, Ms. Sneed was guided to take dictation again.  What to Do When You’re Dead; A Former Atheist Interviews the Source of Infinite Being came through as God’s message to the world, about humanity’s path and responsibility to the soul.

Published by Robert Friedman, notable for his discovery of Neale Donald Walsch, in 1995, What to Do When You’re Dead has become Sneed’s jumping off point for verbal transliteration in front of amazed audiences around the country.

She now performs Source Talks and Soul Readings for audiences and private clients around the world. She is working on her next book entitled, Love’s Highway; Where will it Take You When You Can’t Get there Alone, on relationships and love.

Available in softcover print and Kindle and Nook editions…