You are here: Home / God-scribed Writing / Dear Godscribe: / Why Stingy and Spendy Fall in Love

How a Spender Attracts her Spendthrifty Mates 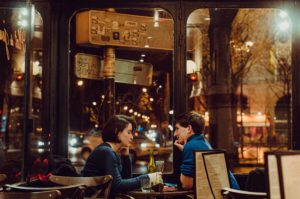 My boyfriend and I have been dating for four years.

We were each married 17-19 yrs with our first spouses.

My first husband was very spendthrifty, and even though we both worked and made good money, there were many elements of my life where I still felt like college students.

For example, when we first got married, we bought a cheap coffee table and entertainment cabinet.

I never liked it.  It was supposed to be just a three-year purchase.

My current boyfriend has the same tendency.  He is cheap.

And yet he has more than enough money to have beautiful things.

It’s always about “the deal” for him.  Even Christmas presents are from Groupon.

What is it about me that attracts men with difficulty spending money?

There is never a good time to be funny when the comedy is on you.

So forgive us when we say you are not to blame but to boast, about the reason for this comical refrain:

The story of Spendy and Stingy:

Spendy and Stingy live in a tree.

They count the nuts equally and then divide among the three.

“Two for you and one for me,” says Spendy.

But when Stingy and Spendy get married, each has three.

Spendy and Stingy are marriageable types.

Because Stingy wants nice, but can’t have nice without Spendy.

Spendy likes secure but won’t have secure unless Stingy is around to help.

This complementary relationship is with all those women and men who make great partnerships and need each other for those complimentary ways.

You may have to grovel for a pittance from Stingy, but you’ll at least know that what is there is as good as steady.